Christ Peterson was one of the pioneer settlers of Hamilton county who bore an active and important part in the work of improvement and construction as the county was transformed from its natural conditions to one of the rich farming districts of this great state. Although Mr. Peterson has passed away, his work still lives and he is yet remembered by many who knew him as a man of sterling worth.

His birth occurred in Norway, August 28. 1824, and there he was reared to farm work. He was the youngest child in his father's family and was a young man of twenty-eight years when, believing he could better his condition in the new world he crossed the Atlantic to the United States in 1852, taking up his abode in Grundy county, Illinois, where he secured employment upon a farm and remained a resident of that county for five years. The year 1857 witnessed his arrival in Hamilton county, and he settled on section 36, Ellsworth township.
As a companion and helpmate for life's journey, Mr. Peterson chose Miss Melinda Pierson. Their marriage was celebrated on the first of November, 1858, in Story county. The lady is a daughter of John and Sarah (Knutson) Pierson, and was born in Norway in November 1841, but when a little maiden of three years was brought to the United States, the family being established in La Salle county, Illinois. Mrs. Peterson has two sisters, Mrs. John Christianson and Mrs. Sorenson, who are living in Story county. There is also one brother, Peter Pierson, who resides in the southwestern part of Minnesota. The home of Mr. and Mrs. Peterson was blessed with nine children, but the eldest, Sarina, died at the age of four years, and Henry died in infancy. Sarah is now Mrs. Burke, of Hamilton county. Helen is deceased. Helen M., the second of the name, became the wife of T. S. Sydness, by whom she has three children: Sophia C., aged five years; Melinda G., aged two years, and Martha, who was born October 1, 1901. Hannah, the next member of the family, is the wife of James Johnson, of Story county, Iowa. Henry and Eddie are both at home, and Martin is living with Mrs. Burke, in this county.
When Mr. Peterson took up his abode in Hamilton county he found that the entire district was almost an unbroken prairie. Plenty of wild game abounded and wolves were also frequently seen. He made his way by rail from Illinois to Iowa City and thence proceeded on foot to Story county. His wife came by wagon from Illinois to Iowa, and three weeks and two days were required to make the trip. As the years passed Mr. Peterson developed his land into an excellent farm, becoming the owner of a valuable tract of one hundred and thirty-five acres, which he continued to cultivate until his death. The fields were well tilled and the farm returned to him a golden tribute for his labors. He was prominent in politics, supporting the Republican party, and held the office of school director and trustee. A self-made man he owed his prosperity entirely to his own efforts, and his life history proves conclusively what can be accomplished through determined purpose and sound judgment in the land where labor is unhampered by caste or class. He died December 7, 1901, at the age of seventy-seven years, respected by all who knew him. The home farm is now operated by T. S. Sydness, the son-in-law of Mrs. Peterson, who is an enterprising and progressive agriculturist. 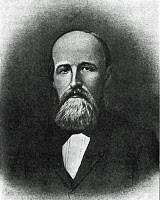