Although he is now residing in Wright county, Andrew Jackson Frakes was for many years actively identified with the agricultural development of Hamilton county, which was his home during his youth and early manhood. He was born in Logan county, Illinois, May 7, 1840, but at the age of thirteen years he accompanied his parents on their removal to Iowa. They located in Hamilton county, where the father entered a half section of government land which he cultivated during the remainder of his active life.

The education of Andrew Jackson Frakes was begun in the schools of his native state and completed in those of Hamilton county. At the age of twenty-two years he enlisted in Company K, Thirty-second Iowa Volunteer Infantry and remained in the service for three years. He was taken prisoner at the battle of Pleasant Hill, April 9, 1864, but his parole was effected two months later and he was exchanged February, 1865. Shortly thereafter he was seriously wounded in the left leg and was sent to the Marine hospital where he was retained for three months. The wound sustained was so serious as to cripple him practically for life and in consequence he has been a sufferer therefrom to this day. At the expiration of the three months in the hospital he was given a three-months furlough and returned home, and while here he bought some land in Hamilton county. He was mustered out on August 23, 1865, and upon his return home immediately began cultivating and improving his farm, upon which he located after his marriage. Three years later he sold this place and bought another farm in the county, which he cultivated for ten years. At the end of that time he likewise disposed of it and removed across the boundary line into Wright county, and bought a half section of land. Mr. Frakes cultivated the latter place until 1898, when he withdrew from active work and removed to Woolstock, where he bought a residence and has ever since lived retired.

Soon after returning from the war Mr. Frakes married Miss Mary Calkins, of Hamilton county, and they were the parents of twelve children, seven of whom are living and five married. In order of birth they are as follows: Anna M., who became the wife of A. Baine; Hattie E., who married F. A. Doolittle; William W.; Andrew J., Jr.; Fannie, who is the wife of James Pierce; and Charles A. and Walter C.

Mr. and Mrs. Frakes are members of the Baptist church at Woolstock, and fraternally he is affiliated with the Webster City Post of the Grand Army of the Republic. His political allegiance is given to the democratic party. Both Mr. and Mrs. Frakes enjoy a wide and favorable acquaintance among the citizens of Hamilton county, where they resided for many years and have a large circle of stanch friends. 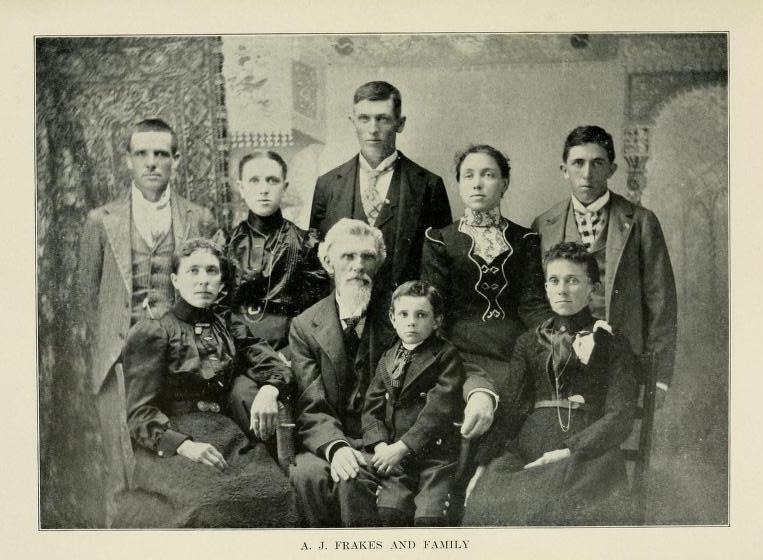