On June 15, 1863, he enlisted in Company G, Eighth Iowa Cavalry, with which he served two years and 3 months. He was discharged Aug. 30, 1865. Mr. Reeve served in Sherman's army until they reached Atlanta, then he was sent to Nashville. He traveled 850 miles on the Wilson raid and suffered an attack of typhoid fever while in the service.

Hampton, May 28 - Orson G. Reeve, the oldest settler in Franklin county has been named chairman of the invitation committee for the Franklin County Diamond jubilee, which will be held at Hampton on Sunday and Monday, June 14 and 15, celebrating the seventy-fifth anniversary of the founding of Franklin county and Hampton. The other member of the committee will be residents of Hampton who have resided in Franklin county 50 years or more. Invitations to return for the celebration will go out to all former Franklin county residents whose addresses are obtainable.

Altho Orson Reeve is now more than 85 years of age, he has a vivid and accurate memory, and he can sit by the hour and recall incidents of old times. Some of these are the famous Indian scare, which proved to be a false alarm; the breaking of the first sod in the county; how Chief Johnny Green and his Indians used to camp each spring within 40 rods of the Reeve cabin.

Reeve Recalls Prairie Scenes
Born at Ashtabula, Ohio, on July 4, 1846, I can well remember the gradual progress of the white man westward. Altho only a small boy of seven years, I can clearly recall when our family traveled westward by rail to Rockford, Ill., started in a covered wagon on the long trek to Franklin county. I can also still recall the beauties of Iowa's virgin prairie and its patches of forest as we passed along the route.

At that time, Cedar Falls was the westernmost outpost of civilization in this part of Iowa. My father, James B. Reeve, had been here before, and he was one of the first settlers of Franklin county. John Mayne and his family were the others. My father was so favorably impressed with the community in Reeve township, around the places now known as the J.C. Jones, J.M. Soper and the C.E. Sheppard farms, that he sent word for us to meet him at Rockford and brot us out here to make our home.

We arrived in Franklin county Sept. 15, 1853, and there were then three cabins standing. These belonged to George Sturms, a man named Fairchild, and Mayne. All the settlers assisted my father in building a cabin for us and three days after our arrival, we had a home. Since that time, Franklin county has always been my home, and I have watched it progress from a raw pioneer outpost to one of the finest and richest farming communities in the world. I have seen the hardships and the trials which we, as pioneers, endured from the days of the covered wagon and the ox-team, and have lived to know and enjoy the fruits of modern progress - to appreciate the vast difference between those early days when a trip of 100 miles took four or five days, and the present time when we can hop in our automobile and drive 100 miles over finely paved roads in only a couple of hours.

~Mason City Globe-Gazette, May 28, 1931 (the photo accompanied this article) 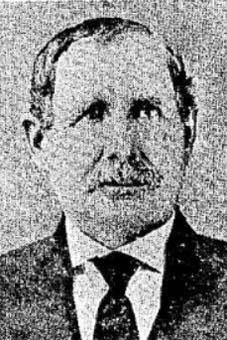