He taught school in Illinois for several terms and came to Hampton in the fall of 1870 where he has since resided. He was married to Miss Emma Jane Marsh at Oregon, Ill., Nov. 19, 1867, and they have five children, E.J. Stonebraker, Jr.; Loyola Stonebraker, William Stonebraker, Mrs. Gertrude Hinton, Mrs. Nellie Typer, all of Hampton, and Mrs. Eppie Typer, Polo, Ill.

Mr. Stonebraker served as past department commander, G.A.R., during 1927.

Hampton, May 16 - E.J. Stonebraker took part in three battles. He was born at Mt. Morris, Ill., and attended the seminary and college there. In 1863, though only 17, he joined company E of the Forty-Sixth regiment of Illinois volunteers. This regiment was made up of boys, most of whom were only 17 but succeeded in passing for 18, the age limit. The captain, H.F. Marsh, was only 19. The largest battle they took part in was Chickamaugua.

After the war, Mr. Stonebraker was married to his captain's sister, Miss Emma Marsh, and two years later came to Hampton where he was a painter.

Although he has suffered a stroke and is bedfast, he and his wife still maintain their home. Their children are L.E., Will, E.J., Mrs. Gertrude Hinton and Mrs. Nellie Typer of Hampton and Mrs. Epfie Typer of Polo, Ill.

~Mason City Globe-Gazette, May 16, 1935 (the photo accompanied this article) 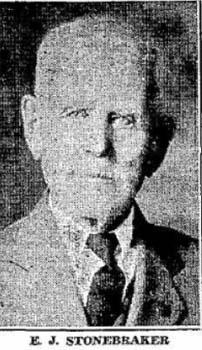