William D. Evans
Judge of the Supreme Court, was born in Marquette county, Wisconsin, May 10, 1852. His parents were both born in Wales. In October, 1858, he came with his parents to Williamsburg, Iowa. Here he attended the public schools and in the fall of 1873 entered the State University.

While a student at the university he taught school and was an instructor in a number of teachers' institutes during vacation. He graduated from the classical course of the university in 1878 and the following year took the law course, from which he graduated in 1879.

Following his admittance to the bar in 1879 he located at Hampton. In 1886 he was elected the first county attorney of Franklin county, which office he held until 1890. In 1902 he was elected a judge of the district court for the Eleventh judicial district.

During the years 1907-8 he was law lecturer at the State University. In September, 1908, he was nominated for judge of the supreme court by the republican state convention to fill the vacancy occasioned by the death of Judge Charles A. Bishop.

A republican in politics.

~The Iowa Official Register for the years 1915-1916; compiled under the supervision of William S. Allen, Iowa Secretary of State, by Henry C. Baumgartner; pg. 688, Biographies of Iowa Supreme Court Justices 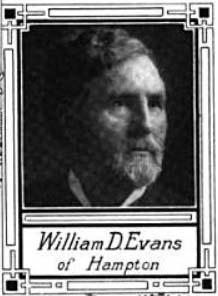