Harriman, Wilbert Eugene, college surgeon and professor of pathology, histology and physiology, at the Iowa State Agricultural college, is one of those young men who have learned early to appreciate the value and necessity of thorough, systematic training, and by improving every opportunity to secure this training, he has attained success much earlier in life than would otherwise be possible.

He is a son of Hon. W.F. Harriman, whose biography is printed herewith. Dr. Harriman's mother was formerly Ellen E. Mitchell, who was born in Illinois where her parents were early settlers, but who moved to Wisconsin when she was quite young and afterwards to Iowa. Dr. Harriman's ancestors on his father's side came from a long line of New Englanders, while his mother's people were of Scotch and German descent. The doctor's great-grandfather, on his mother's side, was an officer in the war of 1812 and his great-great-grandfather was a soldier in the revolutionary war.

Dr. Harriman was born at Cherokee, December 4, 1871, and when 5 years old removed with his parents to Hampton, where he attended school regularly until the time of his graduation from the high school in June, 1890.

He entered the Iowa Agricultural college in July, 1890, and selected the scientific course. He was always popular as a student, for he was wide-awake and generous. He was prominent in all the activities of the college, a loyal member of the Welch-Eclectic Literary society, captain of Company E in the college battalion, manager of the baseball team, and during his sophomore year was chosen class president.

At the close of his sophomore year, he began the study of medicine in the office of Dr. W. A. Rohlf, of Hampton, continuing this work through the winter vacation of 1891-2, and at the close of his junior year, in November, 1892, he entered the medical department of the State university, and at the close of this year's work had the satisfaction of winning the prize offered for the best examination in histology.

Returning to Ames in the spring, he completed his course, graduating in November, 1893. In May, 1894, he passed the examination of the state board of medical examiners, and began the practice of medicine at Gilbert, Story county, where he remained until October, 1894, when he entered Jefferson Medical college at Philadelphia, graduating May 15, 1895. He located at Ames the month following, and on July 16th was elected to the position which he now holds.

The doctor was married October 4, 1894, to Miss Mary E. Wormley, of Newton, Iowa, with whom he became acquainted while in college at Ames, she having been a member of the class of 1895. They have two children: Loretta Marie, born December 11, 1895, and Walter Franklin, born November 10, 1897. They represent the fifth of five generations now living. 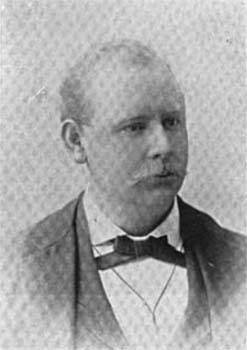