The eighty-second president, Dr. Bert Leander Eiker, died of acute pneumonia a few hours after he had attained a lifetime ambition and been installed as president of the Iowa State Medical Society at the Sioux City Session, May 6, 1932. His service to the Society as president-elect had been outstanding and he looked forward with confidence to still greater service during his presidential year.

Dr. Eiker was born on a farm in Decatur County, Iowa, on October 8, 1871. He attended high school at Leon and the University of Iowa from 1893 to 1895. He graduated from Rush Medical College in 1896 and soon afterwards began the practice of medicine in Decatur City, a few years later moving to Leon where he practiced until his death on May 6, 1932. He was a frequent attendant of postgraduate courses in Chicago and elsewhere.

In 1911 he was elected a Fellow of the American College of Surgeons. Always active in organized medicine, his greatest contribution was his work as chairman of the Committee on Medical Education and Hospitals of the Iowa State Medical Society, which published an important report in 1930 after an exhaustive survey of Iowa hospitals. He was a member of the House of Delegates of the American Medical Association in 1922, 1924 and 1928, and was selected for important committees on this body. He was on the State Board of Health and Medical Examiners from 1906 to 1913, serving as president for the last two years. He was representative to the Iowa Legislature from 1900 to 1904. The year of his death the hospital at Leon was established, and he was chosen as the first president of the hospital staff. He had also served as president of the Decatur County Medical Society.

He was married August 27, 1907, to Edith Hendrickson. They had one son and two daughters. 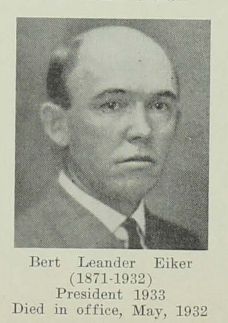