"TO WHOM IT MAY CONCERN:

"We, Ebenezer Robinson, and Angeline E. Robinson, husband and wife, hereby certify that in the fall of 1843, Hyrum Smith, brother of Joseph Smith, came to our house in Nauvoo, Illinois, and taught us the doctrine of polygamy. And I, the said Ebenezer Robinson, hereby further state that he gave me special instructions how I could manage the matter so as not to have it known to the public. He also told us that while he had heretofore opposed the doctrine, he was wrong, and his brother Joseph was right; referring to his teaching it.

"Sworn to and subscribed before me this 29th day of December, 1873.

Mrs. Robinson having died since the execution of the foregoing, and some question arising as to how and wherein the said Hyrum Smith (one of the first officers and leaders of the church) had given special instructions to Mr. Robinson, he was questioned in regard to the matter, whereupon he executed the following:

"TO WHOM IT MAY CONCERN:

"This is to certify that in the latter part of November, or in December, 1843, Hyrum Smith (brother of Joseph Smith, President of the church of Jesus Christ, of Latter-Day Saints) came to my house in Nauvoo, Illinois, and taught myself and wife the doctrine of spiritual wives or polygamy.

"He said he heard the voice of the Lord give the revelation on spiritual wifery (or polygamy) to his brother Joseph, and that while he had heretofore opposed the doctrine, he was wrong, and his brother Joseph was right all the time.

"He told me to make a selection of some young woman and he would seal her to me, and take her to my home, and if she should have an heir to give out word that she had a husband who had gone on a mission to a foreign country. He seemed displeased when I declined to do so.

"Subscribed and sworn to before me, a Notary Public in and for Decatur County, Iowa, this 24th day of October, A.D. 1885.

The Gurleys take to the ministry of the gospel and practice of the law naturally, one of the family having been Attorney-General of the State of Louisiana, and another, John A. Gurley, Universalist minister, and member of Congress, from Ohio. Z. H., himself, is noted as an able reasoner, and possessed of good oratorical powers, having, as a rule, full houses of attentive listeners wherever he speaks, and, notwithstanding the opprobrium of the name Mormon, has for years been permitted the use of various church houses, assisted by ministers of various denominations, and all simply because he preaches the gospel, and abuses no sect nor people. He has very many firm friends in the county." 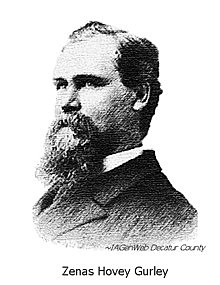