Forces Woman and Babe into Buggy and after an All Night Drive Murderer Finally Relents and Spares Their Lives.

I HUGGED baby close and thought of my dead parents, shot down by the husband at my side, as I rode with him all night and begged for my life and the life of my baby. And then Mrs. Cal Littlepage of Valley Junction broke into tears and told of the most shocking tragedy in central Iowa in recent years.

Cal Littlepage, a Tennessee mountaineer, came to Iowa a few years ago and married the daughter of Mr. and Mrs. Elmer Jamison, living on a farm near Booneville. Because he treated her cruelly she secured a divorce and the custody of their little child.

After making threats that he would cause trouble unless she returned to him, Littlepage crept up to the Jamison home and from the shelter of a fence shot down Mr. and Mrs. Elmer Jamison, the father and mother of his former wife, in cold blood.

Then he fired at her and missed. As she halted and begged for mercy, he granted her request, and hitching up a team belonging to the dead Jamison, put his wife and baby in the buggy and started on an all-night drive. Probably he intended to kill them both and then escape, but her pleadings were too much for even his blood-thirsty heart, for after driving until late into the night he left her at the home of a friend, gave her $10 for the baby, and departed.

Early In the morning his dead body was found near Valley Junction, a bullet through his head and his two automatic revolvers and rifle nearby. He had cheated the law and the pursuing posses by suicide.

During the night hundreds of men were on his trail and in one instance he passed through a posse, but the officers dare not try to take him by force for fear that the woman and baby would be killed in the ensuing fight.

I think my tears and pleadings during the night for the life of baby saved my own life, said Mrs. Littlepage, "but my experience has ruined my health. 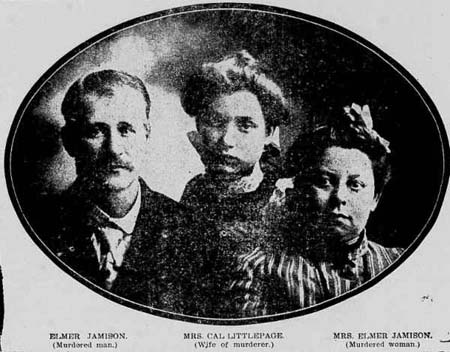