Edwin Hurd Conger, of Des Moines, was born in Knox County, Illinois, March 7, 1843; was educated at Lombard University, graduating in the class of 1862; enlisted at once as a private in Company I, One hundred and second Illinois Volunteer Infantry, in which he served until the close of the war, attaining the rank of Captain, and recieving from the President the brevet of Major for "gallant and meritorious conduct in the field;" studied law, and graduated at the Albany Law School in 1865, when he was admitted to the bar, and practiced at Galesburgh, Illinois, until 1868; removed to Dexter, Dallas County, Iowa, in 1868, and has since been engaged in farming, stock-growing, and banking; was elected Treasurer of Dallas County in 1877 and re-elected in 1879; was elected State Treasurer of Iowa in 1880 and re-elected in 1882; was elected to the Forty-ninth and Fiftieth Congress, and was re-elected to the Fifty-first Congress as a Republican, receiving 18,424 votes, against 13,027 votes for Allen E. Morrison, Democrat, 1,557 votes for J.A. Nash, Prohibitionist and Labor candidate, and 3 votes scattering.

-transcriber is not related & has no further information

******
Edwin Hurd Conger, who has been appointed to succeed Mr. Adams, of Pennsylvania, as United States Minister to the new Republic of Brazil, was born in Knox County, Ill., March 7, 1843. He received his education at Lombard University, graduating in the class of '62. He immediately thereafter enlisted as a private in Co. I, 102d Illinois infantry, in which he served until the close of the war, attaining the rank of captain. He studied law, in 1866, and was admitted to the bar, and practiced at Galesburgh, Ill., until 1868; in that year he moved to Dexter, Dallas county, Iowa, and ever since has been engaged in farming, stock raising and banking. In 1877 he was elected Treasurer of Dallas County and re-elected in 1879. In 1880 he was elected State Treasurer and re-elected in 1882. Entering the race for Congressional honors he was elected from the Seventh District, Iowa, to the forty-ninth Congress, and re-elected to the Fiftieth and Fifty-first Congresses, as a Republican. Mr. Conger will sail for his post of duty on or about the 20th inst. 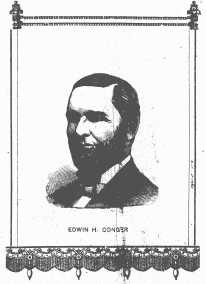