[NOTE: Her first husband, Herman Fruchtenicht, was pastor at St. Paul Lutheran Church in Garnavillo, Iowa, for about two years, 1880-1882. The family is listed there in the 1880 census. She remained in Garnavillo with her three daughters for well over a decade after his pastorate and is listed there with them in the 1885 census, her occupation as music teacher. She lived there until her second marriage in 1898 to John F. Bierbaum. They moved to Monona, IA, and are recorded there in the 1900 census. She died 3 June 1943 in Dubuque, IA, after living at the Mount Pleasant Home there since 1917. Her maiden surname is sometimes given as von Seitzberg.]

Dubuque Woman Tells Of Long Journey to Galena in 1860s

She was Mrs. Louine Bierbaum, who has been a resident of the home for 26 years. She was probably the least excited of the persons attending the party in her honor.

I dont see why you want to be bothering taking a picture of me, was the first thing she told the Telegraph-Herald photographer. Why, only a few weeks ago someone showed me a picture in the paper of an old lady who was 102 years old. But she was very willing to cooperate, and the photograph on the page is a record of the unusual cake-cutting event.

Mrs. Bierbaum still enjoys good health. Her eyesight has been failing during recent months, but she is still able to hear well and is up around the home every day. Her mind is as bright as the proverbial silver dollar.

She was born in Germany, daughter of a German jeweler, and was christened Louine Mathilde Christiane Von Seizberg. When she was only a few years old, her father suffered an attack of malaria fever in Germany, and his doctor ordered an ocean voyage as a cure.

Of course he couldnt afford the expense of the trip back to Germany after he did cross the ocean for his health, Mrs. Bierbaum said, so he took my mother, three brothers, and younger sister with him and moved to Galena, Ill., when he got to the United States. I was left behind in Hamburg with my aunt and uncle.

Soon after my family had gone to the United States, my aunt and uncle had to move from Hamburg to Portugal. This was a very terrible trip. When we were off the French coast near the Bay of Biscay, we ran into a bad storm and for several days we thought we wouldnt make it to Portugal, she said. Mrs. Bierbaum was only 13 years old when she made this trip 87 years ago.

During the eight years she lived in Portugal she attended school and learned to speak four languagesFrench, Germany, English, and Portuguese. She was still able to read German until a few months ago, when her eyesight began to fail. Her birth certificate, which she has carefully preserved in her purse, is written in Germany. She said Friday that she would never forget how to read German.

The Trip to Galena

Her next ocean voyage was when she was 21 years old, soon after her uncle died and she decided to bring her aunt to Galena. This was a bad trip, too, she said. My aunt was sick all the time we were on the boat, and I was afraid she would die and leave me alone. But we didnt give up, and finally got along all right, she chuckled. It took 56 days to make the crossing on the sailboat, which carried a cargo of port wine.

She created quite a sensation when she arrived in Galena with her European-styled clothes and upright piano, the first piano of its kind to be used in Galena. It was on this piano that she taught lessons for several years.

The youngsters used to tease me about my new-styled clothes, she said Friday. When I would go across the Galena River to see my scholars the young boys would call Hello, Mrs. Styles. Where are you going, Mrs. Styles? She has remembered this unique title for more than 75 years.

Took Life As It Came

When asked what her advice for longevity was, she said I just took it as it came. Ive had my disappointments and bad luck, but I had to take them.

Asked at different times during the interview if she remembered certain dates, she would reply, Oh yes, of course I dowith emphasis on the of course.

Mrs. Bierbaum lived at Galena for several years before she was married and moved to Indianapolis. She returned to the home here 26 years ago. One of her daughters lives at the home here with her.

She was pleased with the picture of her published in The Telegraph-Herald two years ago on Mothers Day, but thought it looked funny for her to be holding a rose near her face. She still has a print of the picture tucked away in her dresser drawer, and got it out again Friday to show it to her friends.

The celebrant received many gifts and cards Friday, and was honored at a reception at the home Friday afternoon by the board of directors.

Only a very small fraction, if any, of the readers looking at this picture will be able to do what Mrs. Luine Bierbaum is doing in the photo -- cutting her 100th birthday cake. Mrs. Bierbaum, who recalled many interesting incidents that occurred more than 80 years ago, celebrated her birthday Friday at Mount Pleasant Home here. The elaborately decorated cake in the foreground was a gift from the board of directors of the home, and the bouquet of flowers, of which a portion is showing at the left of the photo, was a birthday gift from The Telegraph-Herald. 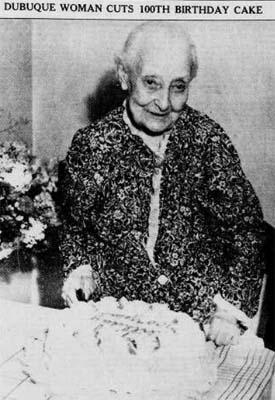