Murdoch, Miss Marion, minister, born in Garnavillo, Iowa, 9th October, 1849. She is one of the successful woman ministers of Iowa, where most of the active work of her life has been done. Her father, Judge Samuel Murdoch, is the only living member of the Territorial legislature of Iowa. He has been a member of the State legislature and judge of the district court, and is well known throughout the State. Her mother is a woman of strong individuality, and now, at seventy-two years of age, is a woman of great mental activity and excellent physical powers. The daughter inherited many of the vigorous mental traits of her parents. Her early life was spent in outdoor pursuits, developing in her that love of nature and desire for a life of freedom for women, which is one of her strongest characteristics. She was educated in the Northwestern Ladies' College, Evanston, Ill., and in the University of Wisconsin, Madison. She was graduated in the Boston University School of Oratory, then under the leadership of Prof. Monroe, and afterwards spent several years in teaching in Dubuque, Iowa, and Omaha, Neb. During that time she was engaged in institute work each summer, thus gaining a wide acquaintance and reputation in her own State. On deciding to take up the ministry she at once entered the School of Liberal Theology in Meadville, Pa., in 1882. She graduated and took her degree, B. D., from the same school in 1885. Her active labor in the ministry began while she was still in the theological school. She occupied pulpits constantly during the vacations, and occasionally during the school year. Immediately after completing her theological course she was called to Unity Church, Humboldt, Iowa, and remained there five years. Under her management it became the largest church in the place. It is growing and vigorous, full of enthusiasm for the cause it represents, and active in all benevolent enterprises. It stands as a worthy monument of the years of labor she has bestowed upon it. She was minister of the First Unitarian Church in Kalamazoo, Mich., for one year, following which time she returned to Meadville Theological School and took a year of post-graduate work. She has now (1892) gone abroad to take a year's course of lectures in Oxford, England. From the first her ministry has been successful. Her fine training under Prof. Monroe developed a naturally rich, powerful and sympathetic voice, making her a very attractive and eloquent speaker. Her pulpit manners are simple, natural and reverent. Miss Murdoch is essentially a reformer, preaching upon questions of social, political and moral reform in a spirit at once zealous and tolerant. While decided in conviction, she is liberal and generous to opponents of her views. She is very popular and active in the social life of her church and greatly loved by her people. In clubs and study-classes she rouses men and women to active thought, being especially fitted to lead Shakespeare classes by her years of study with Prof. Hudson in Boston.

~ A woman of the century: fourteen hundred-seventy biographical sketches accompanied by portraits of leading American women in all walks of life; Portraits and biographies of prominent American women; F.E. Willard & M.A.R. Livermore; 1893; pg 529-530 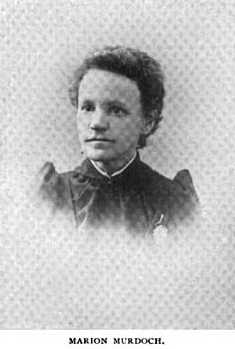