Miss Janet Duncan was born May 13, 1849, at Hebron, McHenry county, Illinois. She died in Clear Lake, January 15, 1914. Her parents, Thomas and Almena Duncan, were pioneers of Cerro Gordo county, Iowa, where they arrived in 1863, settling near Clear Lake when the population of that place numbered but a few hundred.

With the parents came four daughters, Azubah, Jean, Janet and Marion. The latter was called to her reward in June, 1915. The survivors are Mrs. Azubah D. Frost and Mrs. W. C. Tompkins, both of whom reside at Clear Lake. The fifth sister, Mrs. Agnes Duncan Ehle, remained in Illinois, where she passed away. One year after the family came to Iowa, Miss Duncan, then fifteen years of age, applied to the county superintendent for permission to teach in the Palmeter school in Lake township, the county superintendent being George P. Griffith, under whom she had been a pupil in the Clear Lake school. Hesitating a moment and looking questioningly at the young girl before him, he said: Net, you are not old enough to teach school, but I am going to give you a certificate, for if I do not, that school will go to someone who will not know half as much as you do.

Thus began Miss Duncan's activities as a school teacher, which were continued until she had taught forty-one years in the schools of Cerro Gordo and Hancock counties. Two more years given to study in seminary and normal school to better fit herself for teaching, make a total of forty-three years devoted to the youth of the community in which she lived. In fact, except for a period of six years when impaired health compelled her to rest, her whole life was given to educational work. After teaching several terms in Hancock county, at Concord and at Ellington, she was called to the larger schools of Clear Lake and Mason City and to those schools she gave the best years of her life and the fruits of her ripe experience. She taught for about twenty years at Clear Lake and eleven years at Mason City.

At the time she resigned her position as teacher one of the local papers said:

Miss Duncan, who has so faithfully and effectively served the district for many years, has finally decided to resign and pass the cares and trials to another. It is not saying too much in stating that no teacher has done better work, enjoyed the respect of the pupils more, applied herself to her work and responsibility more conscientiously, and secured better and more lasting results than has Miss Duncan. The pupils came to her room knowing full well that only good work would be accepted and adjusted themselves accordingly. No matter what the conduct of the boy or girl has been, this faithful teacher did not need to intermingle with the pupil long before she had the respect and cooperation of the most obstinate boy or the silly, incredulous girl. The district loses one of the best, most faithful and highly esteemed teachers it has ever employed. We cannot estimate her value to the school in dollars and cents. The better and more useful lives of the scores of boys and girls who had the good fortune to come under her tutorage will testify abundantly to her value and splendid personality.

A coworker wrote: In every person who came within the sphere of her influence she felt a deep personal interest, and she possessed the pleasing faculty of making others feel that her concern for them was lasting and true. To this superior quality, perhaps, may be ascribed the fact that as they gathered about her bier there mingled with the boys and girls, the pupils of today, the gray-haired men and women who were the pupils of twenty and thirty and forty years ago. They came from Clear Lake, from Mason City, from Ellington, and many who could not be present in person were silently represented in the profusion of beautiful flowers sent to the sorrowing ones as tokens of friendly sympathy.

In the course of the brief funeral service this statement was made: In scores of families here, both parent and child were of school age during the period of her activities as an instructor. Most families in Clear Lake have felt her influence, which was ever for the good of the boy and girl, and where her ministrations have reached so many, the principles which she has instilled in so many lives must have an uplifting effect in this community far into the future.

The schools have suffered an irreparable loss in the death of Miss Janet Duncan, one of the most efficient, conscientious and respected teachers that ever filled a position in the school system. She was thoroughly imbued with the true teacher spirit, loved the children with whom she labored, always recognized the importance of good working discipline and its bearing upon success, and never hesitated to render valuable assistance to her coworkers when they desired it. The influence of such a noble character is immeasurable. The noble ideals that were inspired by her instruction and her own life of sacrifice and of good deeds will live in the lives of generations to come. She was a faithful teacher in the Clear Lake schools for more than twenty years, and during that period hundreds of boys and girls came under her helpful influence. She loved the truth and despised sham in every form and up to the last day in the schoolroom taught as she believed. The beautiful floral offerings indicated only to a small extent the abiding love that the pupils and faculty had for this noble woman, helpful teacher and faithful friend.

F. W. Hicks, former principal of the Clear Lake schools but now of Ames, Iowa, in a personal letter to a sister of Miss Duncan, said in part: In the past I have received great help from teachers with whom I have been associated. But never have I received such help and such inspiration as I did from your sister during the four years that I was associated with her. Her personality was uplifting and inspiring, her counsel was safe; she helped me in successful work. I cannot but feel this as a personal loss. The world has been made better, many lives have been enriched, and rare principles of living have been demonstrated through her work. 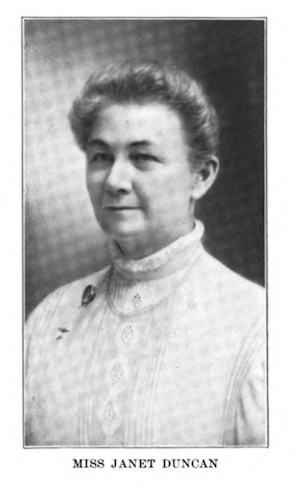 Index of bios from Iowa : Its history and Its Foremost Citizens