[Storm Lake]Supt. Walter D. Cocking, who has been at the head of the Storm Lake public schools for the past three years, leaves next Friday for Spencer, where he will teach history and civics in the extension summer school at the Iowa State Teachers college. In the fall Mr. Cocking will attend the state university at Iowa City where he will take a course of study to secure his Master's degree.

The efficiency of any institution may be measured directly by what it accomplishes. Judged by this rule, Supt. W. D. Cocking may be placed in the balance and found not wanting, for during the three years that he has been in Storm Lake every department of the public school system has shown a marked improvement.

Mr. Cocking took the helm when the Storm Lake schools were about on a level with those of several of the smaller towns. Three years passed, and he has developed a school that is known over the state as one of high standards, a real up-to-the-minute school in every respect, one that will compare favorably with any high school anywhere, one that has been put on the North Central Association list which includes only 86 of the other high schools in the state.

Mr. Cocking's success is no accident. It comes from ability plus energy. It shows power and "punch." With his departure, Storm Lake loses one of its best and most active citizens, and it is with regret that the students of the public schools, their parents and the city in general, bid him farewell.

Since Mr. Cocking has been head of the schools they have never failed to place in any forensic event. He has been an excellent superintendent, and while he has been intensely interested in school activities, he has not confined his talents to school work alone, but has taken an active part in all public affairs and has helped establish a closer relationship between school and community.

By conducting a thorough survey of the school year, he has been able to determine accurately just what each grade could do, and in this way hade [sic] it possible to obtain the very high standard which the schools have reached. One of the important contributing factors in his success here is that he has surrounded himself with a teaching force which is far above the average and from whom he has received the fullest cooperation.

During his first year in Storm Lake, Mr. Cocking organized the junior high system which at that time was an advanced step in education in our public schools. As there was not room to house this department in the building they had then, arrangements were made for the temporary use of Carney hall. In the spring of 1920, owing to the increase in enrollment, the new Junior high school building and the west school buildings were erected, the Construction being supervised by Mr. Cocking in person.

The junior high school building was nearing completion when it burned down on the morning of August 21, 1920. The contractor's time limit was extended to October 1, at which time the building was completed. The new west school was also ready for use at that time. The enrollment in the junior high during the year 1920 was more than 100.

Mr. Cocking was coach of the football team in 1920 and Storm Lake had reason to be proud of the team. Defeated in the first three games of the season, the eleven came back in the fourth game and surprised football dopsters [sic] over the entire state by staging a victory over the strong East Des Moines eleven. During this same year Mr. Cocking had the debating team under his direction. These debaters, all of whom were inexperienced, won their way up to the fifth round in the state contest and brought home the state championship by defeating the Waverly team at Iowa City on May 6, 1920.

One of the biggest events in Storm Lake last year was the high school pageant which was held at the close of the school year, and in which more than 1,000 actors took part. This was the idea of Mr. Cocking and was carried out under his supervision. It was one of the most successful events ever held here. The school exhibit week which was held this spring was also one of Mr. Cocking's innovations.

Both Mr. and Mrs. Cocking have many friends in the city who, while they regret very much to see them go, wish them every good fortune in their new adventure. 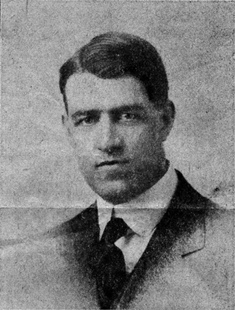