WAUKON, Ia., Sept. 25 - (UP) - Congratulations today poured in from friends in educational work, and neighbors dropped around to express their felications as Miss Bess Goodykoontz rested at the home of her parents here and reviewed the paths which led her from a one-room rural school house to the second highest government position in the educational field.

Appointment of Miss Goodykoontz as assistant United States commissioner of education was announced yesterday at Washington by Secretary of Interior Wilbur. She will assume her new duties Oct. 1. For the last five years Miss Goodykoontz has been assistant professor of education at the University of Pittsburgh. Previously she was supervisor of public instruction at Green Bay, Wis., and prior to that taught in the experimental school at the University of Iowa while studying for her bachelor's and master's degrees.

"Yes, it's quite a distance from rural teacher to my new post, and sometimes the going wasn't smooth, but I can't say it was unpleasant," Miss Goodykoontz said, while her parents, Mr. and Mrs. E.W. Goodykoontz, looked on admiringly.

And then Miss Goodykoontz smiled reminiscently as she recalled the early days when she fought snowstorms and ice-blocked roads to teach her little roomful their three R's.

After a apprenticeship in the rural schools here in northeastern Iowa, the new assistant commissioner of education taught in the elementary grades at Osage.

At all times elementary education was her main thought, and later her specialty. It was not until much later that Miss Goodykoontz attended the University at Iowa City, and taught while she studied. She was graduated here in 1922.

"Naturally, I am pleased with the appointment, though it is not entirely a surprise as Secretary Wilbur called me to Washington in July and asked me if I would accept the position," Miss Goodykoontz said.

"Elementary education always has held my greatest interest, and it is an understanding and interest in that phase of educational work that I will bring to the new place. I don't know just what my duties will be. The position was created only last spring, and I'm the first appointee. The work of the bureau, however, is greatly advisory."

Miss Goodykoontz is the author of a number of text books and articles on elementary pedgagogy.

One of the highest posts held by a woman in the federal government again went to an Iowan when President Hoover nominated Miss Bess Goodykoontz to her position as assistant commissioner of education in the department of the interior. Miss Goodykoontz is a native of Waukon, Allamakee county. The Iowa woman was appointed to her post originally October 1, and her renomination indicates the satisfaction with which her work has been viewed by her superiors. After completing her early education near her home at Waukon, Miss Goodykoontz attended Iowa State college at Ames where she also received her master's degree. Thence she went to Iowa City where she taught for several years at the famous experimental school there. On leaving there, Miss Goodykoontz went to Green Bay, Wis., as public school supervisor. For five years she was professor of elementary education at the University of Pittsburg, where her distinguished record led her to her selection for the federal post.

Waterloo, Aug 24 - Two nationally known educational leaders will headline the speaking program when 1,800 school teachers gather here Sept. 30 and Oct 1 for the thirty-ninth annual session of the Northeast Iowa Teachers association. They are Augustus O. Thomas, secretary-general of the World Federation of Educational Associations, and Bess Goodykoontz, assistant United States commissioner of education, both of Washington. Miss Goodykoontz, is a native of Waukon, Ia.

~partial transcription of the full article from The Telegraph-Herald and Times-Journal, evening edition; Wed. Agust 24, 1932; pg 1 (included the photo on the left below)

Miss Bess Goodykoontz, daughter of Mr. and Mrs. Edward Goodykoontz of Waukon, was one of four to receive honorary degrees at State Teachers' college at Albany, N.Y., this year. Miss Goodykoontz, received her award for outstanding work in education in various branches.

Secondary school problems are the principal concern of Miss Bess Goodykoontz, who is classified in the Altrusa Club as the "Government Federal assistant commissioner of education member."

Like the other service clubs for women, Altrusa has one member from each business and profession, but there is a special classification for the women in Government service.

Miss Goodykoontz is now studying the upset balance between the elementary and secondary schoos in the United States, caused by the Nation's declining birth rate of the past eight years.

Miss Goodykoontz, who has been assistant commissioner of education in the United States Office of Education since 1929, comes from Iowa, where she attended public schools and later taught in both rural and urban districts. She also taught in Iowa State University for several years and was on the faculties of the University of Pittsburgh, Johns Hopkins University and the University of New Hampshire.

She is a member of several national education association boards and from 1933 to 1937 was president of Pi Lambda Theta, an honorary educational sorority. Now she is its first vice president.

In addition to being a member of Altrusa, Miss Goodykoontz belongs to the American Association of University Women and Delta Zeta Sorority.

~partial transcription of the full article from the Sunday-Star, Washington, D.C., July 24, 1938; Club News, pg D-9 (included photo on the right below)
~transcribed by S. Ferrall 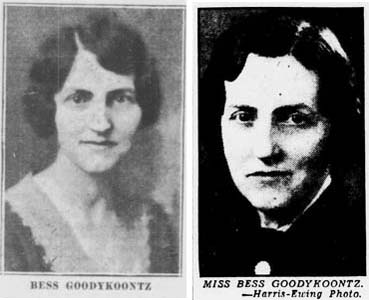