Shortly after his arrival to New York, he enlisted in the Army on May 15, 1847. Landolin was honorably discharged on May 15, 1852, from the West Point Military Academy, New York. He served five years and was a veteran of the Mexican War.

According to the 'History of St. Marys Lycurgus', by Rev. Msgr. Edgar Kurt, Landolin was the first settler in Saint Marys Parish, arriving in 1851. Landolin purchased land in French Creek; Section 3, next to St. Marys Parsonage, for his homestead. Father Thomas Hore was a guest of the Haas family and often celebrated Mass in their home. Landolin and Elizabeths first child Mary Haas (1852-1945) was baptized by Father Thomas Hore in the familys home before the church was built in 1859/60.

Compiled by the submitter from the following references: References: Ancestry.com, Find A Grave, U. S. Federal Census, U. S. Army Register of Enlistments 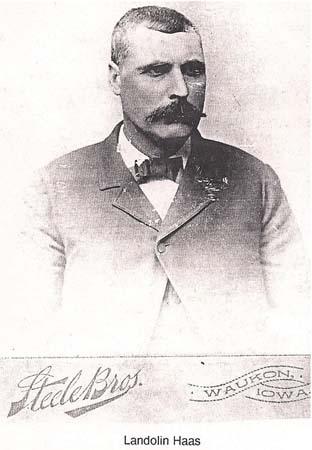