James Lawrence Riley (1861-1936) was the son of James Riley who was born in Ireland, 1824. James Riley immigrated to French Creek, Allamakee county, Iowa and married his wife Bridget Shortt born in County Kildare, Ireland, 1832. James and Bridget Riley were engaged in agriculture in French Creek.

LTG William Edward Riley of the United States Marine Corps, served in both World Wars and in many foreign lands during his military career of thirty-six years.

He graduated from St. Thomas College, St. Paul, Minnesota in June 1917 and reported for active duty to the Marine Corps Rifle Range at Winthrop, Maryland as Second Lieutenant.

In World War I he was engaged in the Battle of Belleau Wood, Battle of Chateau-Thierry, and the Battle of Soissons. For his heroism in action he was decorated with the Silver Star, Oak Leaf Cluster in lieu of a second Silver Star and Croixde Guerre 1914-1918 with Gold Star.

World War II he served on the staff of Fleet Admiral William Halsey, Jr. LTG Riley was engaged in three major campaigns, the Bougainville, Palau Island and Philippines. He was decorated with two Legion of Merit Medals, the Navy Distinguished Service Medal and two Purple Hearts.

LTG Riley and his son Colonel Riley were buried with full honors at Arlington National Cemetery in Virginia.

~The biography was compiled by the contributor using the following references & resources: Ancestry.com, Wikipedia and Google.

~The undated photo, readily available on Wikipedia Commons and several other websites, was added by S. Ferrall, board administrator. 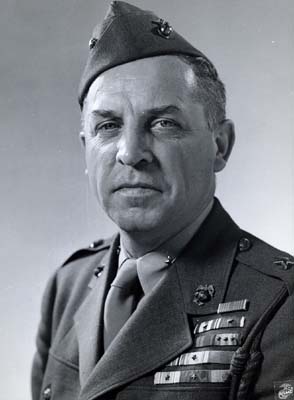